I know that for a lot of you this is a bit far into the future, but I thought it would be nice to run through a few of my lab scenarios to show off some of the new features in Visual Studio 2010.

I am sure that I will miss a bunch of cool features here as this post is just based on my first experience with this, but I will likely post more about these features as we get closer to RTM. As we are only in Beta, anything and everything may change before RTM and the below is just based on my own impressions so there may be other better ways of doing things.

I love WinDbg and will probably continue using it for many years to come since it is a very simple and clean and powerful debugger. I do realize though that not everyone debugs production issues (hangs/crashes etc.) every day (at least i hope not:)), and that most .net developers are very comfortable in Visual Studio.NET, so it is nice to be able to stay within that tool where you recognize the IDE and structure.

If you have compiled the app “debug” and set debug=true in web.config if you are working with an asp.net app, debugging a dump is very similar to being stopped at a breakpoint. Of course, since it is not a live process you can’t hit go, but you can match up source code, see locals etc. without having to learn a bunch of new commands.

There are a couple of caveats here:

How do you gather the memory dumps?

You can get dumps with WinDbg (adplus) as shown in this post or debug diag, or in visual studio.net for that matter (debug/save dump as… when you are debugging)

Typically in a web scenario or in a scenario where you are reproducing a problem in a win forms app or windows service on a customer machine you wouldn’t have visual studio installed there, and then adplus or debug diag are good options for gathering dumps.

For Visual Studio to be able to resolve native (non-dotnet) function names/parameters/types etc., it uses symbols, like any other debugger. For all Microsoft components there are public symbols located at http://msdl.microsoft.com/download/symbols. If you have your own native components you would have to compile them with symbols in order to resolve function names.

You can set up the symbol paths for your symbols under Tools/options/debugging/symbols and a typical setup would look like this: 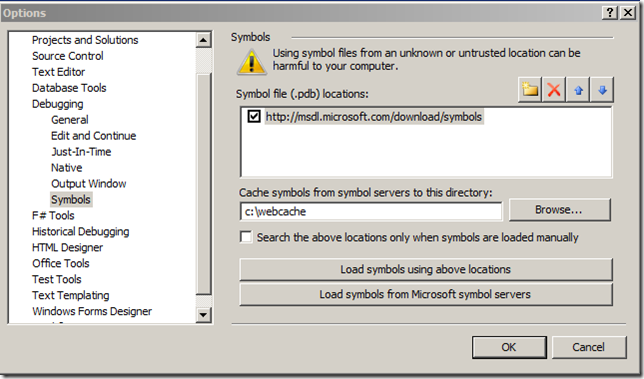 The first time it loads up the symbols it will find them in http://msdl.microsoft.com/download/symbols and as it downloads them it will put them in your cache location c:\webcache. The next time you look at a dump, it will check the c:\webcache location first, and only download the symbols it can’t find there. This means that the first time you look at a dump (any dump) it may take a long time depending on your internet speed as these files can be pretty big, but the next time it should be significantly faster.

In here you can also add the locations of any of your own symbols and this setting is persisted, so the next time you open VS, the symbol paths are there for you.

Notice that there is a button for “Load symbols from Microsoft symbol servers”. This is available once you have started debugging a dump or any process, and this will do the above for you, setting up a local cache if you haven’t done this already. I like setting it up explicitly as pushing the “Load symbols from Microsoft symbol servers” leaves the UI “hanging” without visual feedback so you don’t know how far you have gotten in the process, while setting up a symbol path allows you to see the modules/symbols as they load.

I recompiled Lab 1 with 4.0 (just switching some settings in web.config), ran a stress and grabbed a dump with adplus. Look at the Lab 1 instructions on how to repro and get the dump if you are interested in following along.

I am really interested to see where this will be going in the future and what additional features if any we’ll see in RTM.

Based on my first experience with this here are my impressions:

Why I would use Visual Studio to debug dumps

Why I would stick with windbg

In reality I will probably use a combination of both + debug diag depending on scenario, but I hope this post has given you some insight into the topic and what’s to come.