It’s been a pretty busy few weeks at work coupled with some vacation so I’ve been lagging a bit with the blogging, so sorry for bombarding the blog with new posts now :)

As you all know, Visual Studio 2010 just released and there is a lot of new content out there and I thought I’d mention a few in the debugging/troubleshooting space.

My presentation from TechDays Sweden 2010 was also recorded (in Swedish). 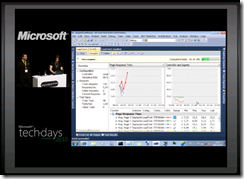 Last minute, I was chatting with one of my friends Tibi Covaci who specializes in parallel programming. Since I was given the graveyard slot (last slot of the conference) we decided to have some fun with it and present together figuring people would be half-asleep anyways after the party from the day before :)

The first few minutes are meant as a joke and a bit of a nudge to those who like to do death-by-powerpoint and spend 30 mins presenting their company and their careers :) If you stay past that you’ll see a demo from start to finish of a performance problem (with profiling, dump debugging in VS 2010 and dump debugging in windbg).

If you want to know who is who in the video, I’m the girl who forgot to comb her hair before the presentation, and Tibi is the funny guy with the big Romanian family :)