I’m back from TechEd in Barcelona, and it was one of the most fun, scary and humbling roller coaster rides I have ever been on.

I am a bit of a glutton for punishment because I signed up to do two sessions and before I knew it I was scheduled to do one in the auditorium (on the largest stage I have ever seen, 760 sq ft). Not only that, but when I got to Barcelona they had scheduled me to do a repeat of the interactive session.

I really do appreciate all the people that showed up at my sessions and I hope that I got at least some of you to take the red pill :)

Lesson #1, don’t talk to the Speakers coach 2 hours before your first presentation

Everyone that hadn’t spoken before at TechEd got to spend an hour with a professional speakers coach, and if I were to give one piece of advice it would be to make sure that your session with the coach is not scheduled for 2 HOURS BEFORE your first auditorium session :) As you might guess, mine was, so two hours before we went through some of the talk. I know I may only be picking out the negatives here but with my brain really really wired all the feedback that I could process was

yeah, that will go real well in the auditorium :) He gave me some really good pointers, but again, my brain was way too wired to process any of it.

I got to the auditorium about an hour in advance, just in time to see an awesome presentation about what is new in C#. I wish I could remember the presenters name but at that point I was in pre-presentation coma. 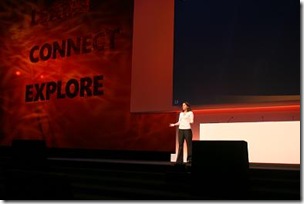 I had prepared and gone through my presentation a million times, and this is stuff that I do every day (debugging that is, not presenting :)) so even though I was really confident with the presentation there was this one demo that had been taunting me. I knew that if I didn’t stop a stress test (in the demo right before it) it would fail miserably.

Well, it’s not all that hard to figure out what happened :) of course I didn’t remember to stop the stress test :) but… luckily enough I had a backup plan and was able to show the results of the test anyways.

Lesson #3, I am not Scott Hanselman or Roy Osherove, I should have asked for a smaller room

If I would have done the whole thing over I wish it would have been in a smaller room. I like to think of my self as a pretty animated person. I love presenting. Don’t get me wrong, I am not Scott Hanselman (my favorite presenter btw), but in a smaller room I can make more of a connection with the audience.

Just look at the pic and compare my size to the size of the screen :)

In the auditorium it is hard to even make out a single person so it’s kinda like talking for 75 minutes to yourself :) and unless you are extremely good or find yourself really funny, that drains your energy pretty fast.

I looked at the pictures and about 2 minutes of the video (all I could muster :)) and yeah, hmm, maybe not as animated as I pictured it in my head :) Next time I need to think more Don Box, presenting from a bathtub.

Doug promised me that he would join me next time to do a Scottish dance on stage for the intermission :) (he’ll probably kill me over this comment) but feel free to jump in and tell him on his blog that he should

Lesson #4, Pairing up to do an interactive session is a stroke of genius

After the break-out session we had country drinks, I had a great time, and 130 swedish developers showed up at the Swedish country drinks. YAY!!!

Chatting to some of my colleagues from work that were there I came up with the idea of having one of our architecture specialists join me for the interactive sessions and it was probably one of the best decisions I’ve made. Mikael Deurell did an awesome job and we had soo much fun delivering the session. 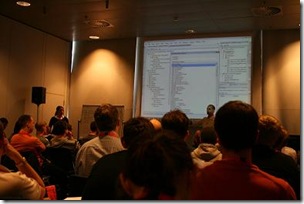 First we had a 5 minute “what do you want to know?” where Mikael wrote down all the topics that came up on the white board.

We went through them point by point and they just magically interweaved with each other prompting new questions. Mike also took notes on the whiteboard of all the commands that I ran in the debugger which worked out excellent since there was no “mumbling with your face to the whiteboard, back to the audience”

Some questions came up around performance counters and Mike went through his spiel about how you can set up counter sets and alerts to make sure that you have your ducks in a row and have a baselines from test that you can use when monitoring in production.

I learned a lot, both from him and from the experiences that the audience shared.

The other cool thing about pairing up to do a session, except for that it leaves you free to roam around the room instead of being chained to the whiteboard, is that at least to me it did make it more interactive since we could bounce stuff off each other. Not only that, but we had two people keeping track of the time instead of one, and it was nice to have someone to give you instant feedback on stage by saying things like “let’s move on to the next topic” etc. Loads of fun.

Lesson #5, Interactive sessions are fun, especially if they are really interactive

Our grand scheme for the session was really simple. We ask people what they want to know about and talk about that. For some reason I was under a misconception that european audiences would be really hard to flirt with but man was I wrong.

Both interactive sessions ended up completely full (to the point where they set up the session closed signs on the door) and from the time we started and throughout the 75 minutes there were constant questions and comments from the audience. I wouldn’t have believed it if someone told me that you could have an active conversation with 80 people at once but that is exactly what it felt like. THE AUDIENCE WAS PURELY EXTRAORDINARY!!!

I came out of the interactive sessions so full of adrenaline that I just couldn’t stop smiling. If you were there I hope you had as much fun as I did.

Lesson #6, The best part of a conference is not the sessions, it’s the time between sessions 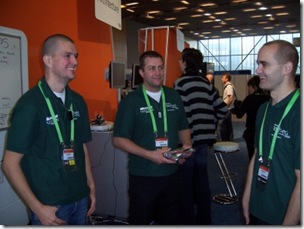 I was sitting in the speakers lounge prepping for one of my sessions and this guy shows up and says “oh, you’re tess?” and it turns out to be mr. Jon Flanders himself, the BizTalk/WF guru. Where else can you meet people like that? Really enjoyed the conversation…

In the architect ask the expert booth I made friends with Björn (excellent blog btw) and Hasse who turned out to work in the same team as my husband, man the world is small.

I got to do some shopping at Desigual and ate some great food at the sea front restaurants at point olympic. Just have to say, I do admire their attempts in making the menu varied. There was Pud Thai, meze, chinese food, pasta, tapas, Turkish kebab, sushi just to name a few entries on the menu. I would love to see the chefs at that restaurant :)

I’m off doing some workshops at the moment, but as soon as I get back I’ll post the slides for the sessions and hopefully I’ll find a place where I can put the video too if anyone want’s to see it.